Visitors of this year’s NATO Days in Ostrava & Czech Air Force Days will get another superb gift for the 15th anniversary of the event from the Italian Air Force, which is sending a very strong representation. Its main part will consist of world-famous aerobatic group Frecce Tricolori that will be accompanied by a flying display of the F-2000 Typhoon.

Frecce Tricolori will bring not only a temperament performance of its solo pilot, but for example also smoke Italian flag closing the group’s show. 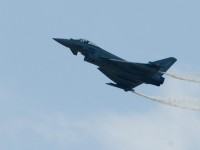 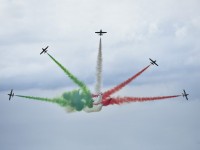 “We have tried to secure the participation of the Frecce Tricolori for a past few years, when they were visiting our neighbouring countries. They will now appear in the Czech Republic after almost ten-year break,” says Zbyněk Pavlačík, Chairman of the organizing Jagello 2000 Association.

Rich programme of NATO Days will thus offer performances of two top aerobatic groups this year. The Frecce Tricolori will join already announced Swiss Air Force’s Patrouille Suisse, which will have its Czech premiere. Moreover, visitors at the Mosnov airport can look forward to premiere participation of the British parachute display teams – the Falcons and the Tigers.

Each of the aerobatic group presents different scenarios of their show. While Patrouille Suisse utilizes supersonic two-engine F-5s aircraft, the Frecce Tricolori display 10 Italian-made training MB-339s, what makes them the world’s most numerous aerobatic group.

Read also: British Falcons and Tigers to swoop over Ostrava

Switzerland sends its F-18 Solo Display together with Patrouille Suisse, and Italy will in similar way present not only the Frecce Tricolori, but also its Eurofighter Typhoon in flying display. It returns to Ostrava after four year, as NATO Days in Ostrava & Czech Air Force Days witnessed its Czech premiere in 2012.

The Frecce Tricolori are already the seventh military aerobatic group present in Ostrava in last ten years. The first of them were British Red Arrows in 2006 (returned in 2012), followed by Spanish Patrulla Aguila (2008) and Patrulla ASPA (2013), the Turkish Stars (2011 and 2013), the Polish Orlik (2015), Belgian Red Devils and Swiss Patrouille Suisse (both 2016).